About Kelpie in English

There are many theories about the ancestry of the Kelpie breed.

One thing is for sure, the Australian sheep farmers carefully selected breeding dogs for the characteristics they needed to work sheep in Australian conditions. They chose the best dogs from like-minded fellow farmers to cross with their own preferred dogs, and produced the intelligent and devoted, hard-working Kelpie.

The name Kelpie was widely used by the Australian sheep farming community by 1872. It is widely thought that the Kelpie was developed from smooth haired Border Collies imported from Scotland by a few different sheep farmers who carefully bred them. Some examples of these dogs are Gleeson's Kelpie, Tully's Moss, King's Kelpie, and Barb, a black Kelpie.

Another theory holds that the Kelpie's ancestors came from Tasmania. There have been suggestions that the Dingo was used in the evolution of the kelpie, but the Dingo is inclined to kill and eat sheep, so this is an unlikely cross. It is also said that the fox is in the ancestry of the Kelpie, probably due to the size and color of the Kelpie. However, the fox and the dog are two genetically distinct species, which makes successful breeding unlikely. The fox has 38 chromosomes, and the dog has 78.

Another idea is that the breed originated in North Africa. North African sheepdogs are thought to have been taken to Scotland early in the 19th century and bred with local collies to produce dogs called Kelpies. These dogs were popular with the Scottish pioneers in Australia because they readily adapted to the conditions.

At the moment there are two kinds of Kelpies. The Australian Kelpie which is recognized by the F.C.I. and the 'Working Kelpie', a not F.C.I.-recognized dog which chooses it's own association. There are also Kelpies which are registered twice.

Characteristics of the race

Kelpies are intelligent, hardworking sheepdogs who render invaluable assistance to Australia's sheep farmers. They are tireless workers who may travel 50 kilometres a day. They are dedicated to their work and will work all day long, with only a brief rest. They are fast and agile, and will run across the sheeps' backs to get to the front of the mob. The love of work is built into their instincts, as is their ability to work sheep. This natural ability is demonstrated by tiny pups when placed in a pen of sheep. Kelpies work well, both in the yards and in open country. Kelpies also make loyal and intelligent pets, but it is important to keep them active in order to satisfy their boundless energy. Kelpies are18-20 inches in height. They come in the following colours- Black, black and tan, red, red and tan, fawn, chocolate and smoke blue.

The general appearance shall be that of a lithe, active dog of great quality, showing hard muscular condition combined with great suppleness of limb and conveying the capability of untiring work. It must be free from any suggestion of weediness.

The Kelpie is extremely alert, eager and highly intelligent, with a mild, tractable disposition and an almost inexhaustible energy, with marked loyalty and devotion to duty. It has a natural instinct and aptitude in the working of sheep, both in open country and in the yard. Any defect of structure or temperament foreign to a working dog must be regarded as uncharacteristic.

The head is in proportion to the size of the dog, the skull slightly rounded, and broad between the ears. The forehead running in a straight profile towards a pronounced stop. The cheeks are neither coarse nor prominent, but round to the foreface, which is cleanly chiselled and defined. The muzzle, preferably slightly shorter in length than the skull. Lips tight and clean and free from looseness. The nose colouring conforms to that of the body coat. The overall shape and contours produce a rather fox-like expression, which is softened by the almond-shaped eyes.

The eyes are almond shaped, of medium size, clearly defined at the corners, and show an intelligent and eager expression. The colour of the eyes has to be brown, harmonising with the colour of the coat. In the case of blue dogs a lighter coloured eye is permissible.

The ears are pricked and running to a fine point at the tips, the leather fine but strong at the base, set wide apart on the skull and inclining outwards, slightly curved on the outer edge and of moderate size. The inside of the ears is well furnished with hair.

The teeth should be sound, strong and evenly spaced, the lower incisors just behind but touching the upper, that is a scissor bite.

The neck is of moderate length, strong, slightly arched, gradually moulding into the shoulders, free from throatiness and showing a fair amount of ruff.

The ribs are well sprung and the chest must be deep rather than wide, with a firm level topline, strong and well-muscled loins and good depth of flank. The length of the dog from the forechest in a straight line to the buttocks, is greater than the height at the withers as 10 is to 9.

The hindquarters should show breadth and strength, with the croup rather long and sloping, the stifles well turned and the hocks fairly well let down. When viewed from behind, the hind legs, from the hocks to the feet, are straight and placed parallel, neither close nor too wide apart.

The feet should be round, strong, deep in pads, with close knit, well arched toes and strong short nails. TAIL - The tail during rest should hang in a very slight curve. During movement or excitement it may be raised, but under no circumstances should the tail be carried past a vertical line drawn through the root. It should be furnished with a good brush. Set on position to blend with sloping croup, and it should reach approximately to the hock.

To produce the almost limitless stamina demanded of a working sheepdog in wide open spaces the Kelpie must be perfectly sound, both in construction and movement. Any tendency to cow hocks, bow hocks, stiltiness, loose shoulders or restricted movement weaving or plaiting is a serious fault. Movement should be free and tireless and the dog must have the ability to turn suddenly at speed. When trotting the feet tend to come closer together at ground level as speed increases but when the dog comes to rest it stands four square.

The coat is a double coat with a short dense undercoat. The outercoat is close, each hair straight, hard, and lying flat, so that it is rain-resisting. Under the body, to behind the legs, the coat is longer and forms near the thigh a mild form of breeching. On the head (including the inside of the ears), to the front of the legs and feet, the hair is short. Along the neck it is longer and thicker forming a ruff. The tail should be furnished with a good brush. A coat either too long or too short is a fault. As an average, the hairs on the body should be from 2 to 3 cms (approx. 0.75 - 1.25 ins) in length.

Any departure from the foregoing points should be considered a fault and the seriousness with which the fault should be regarded should be in exact proportion to its degree.

Male animals should have two apparently normal testicles fully descended into the scrotum. 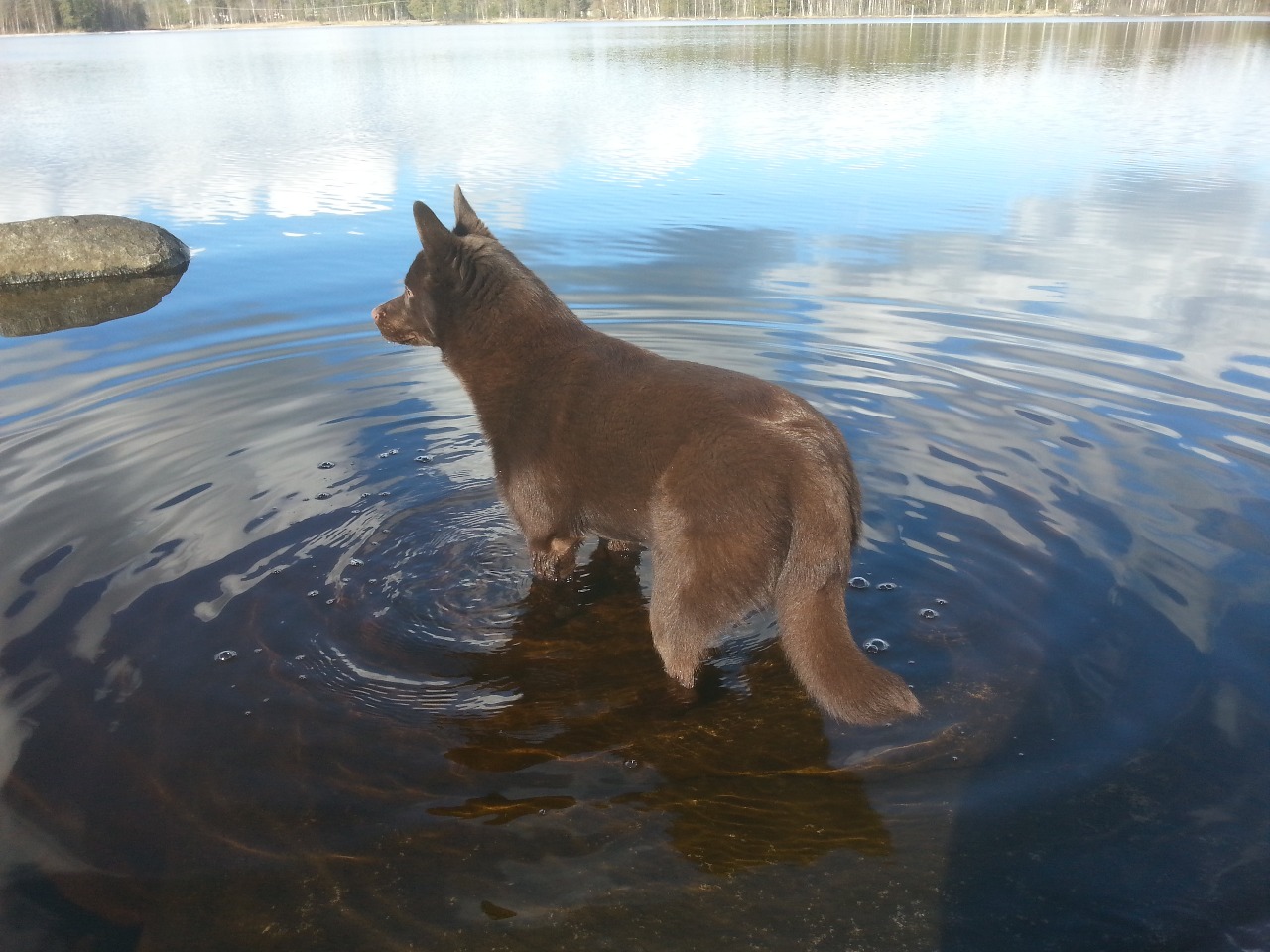